The City of Orange was founded by Alfred Chapman and Andrew Glassell. After several failed attempts at other crops, the first orange groves were planted in 1873 and by 1929, the city was producing oranges in astonishing numbers with 820,000 boxes of oranges coming from a single packing house. While the city has grown to build a solid business base and is home to a large university, the small town values and ambiance remains. The historic downtown area still features some of the old buildings of the past and is a popular destination for residents and visitors to enjoy a day strolling the quaint streets, dining at some of the areas most popular establishments, and shopping at the many antique stores. The City of Orange is well known for the annual Orange International Street fair, an event that draws thousands to the area to celebrate cultures from around the world through food and entertainment. The profile of the city of Orange in Orange County, California includes city history and information for residential services, shopping, dining, and points of interest throughout the city. 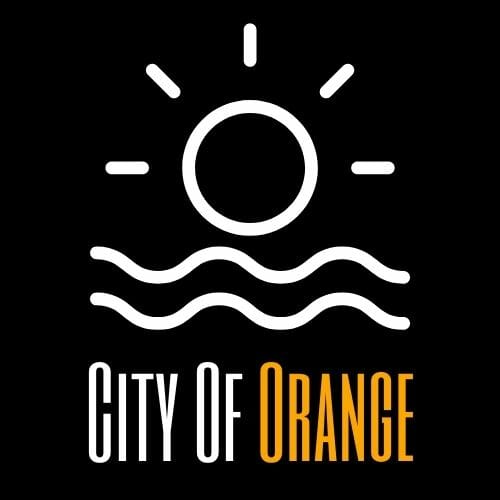 The City of Orange is located approximately 32 miles southeast of the city of Los Angeles, California. Once filled with acres of orange groves, the city of Orange is now a mid-sized city with a strong business base that puts an emphasis on maintaining the small town atmosphere that is demonstrated by the Old Towne area surrounding the historic Orange Plaza. The fountain in the center of the Plaza was added in 1886, and is on the National Register of Historic Places. The city  is most well known for the Old Towne Orange historic district and Chapman University. Fun fact about Orange: the 1984 Olympic Torchbearer traveled around Orange Plaza.

Old Towne Orange is the heart of the city and the spot where the founders began developing the area. The Old Towne district is one square mile in size and many of the original buildings are still in use today, ranking second in California for having the highest concentration of historic buildings in the area. Old Towne features Orange County’s oldest operating soda fountain (Watson’s Drug & Soda Fountain), and the county’s oldest operating bank.

An afternoon stroll gives visitors an idea of what Orange was like between 1888 and 1940. Spend the day browsing the halls of the many antique stores here to find hidden treasures and get a blast from the past. There are many delicious dining options available (in addition to Watson’s) from BBQ at Smoqued, to the District Lounge, which is built inside the city’s first post office and features a large selection of beer and offers live entertainment in the evenings. If you’re looking for a more traditional shopping destination, The Outlets at Orange is located on The City Drive just off the I-5. This is the only outlet center in Orange County and features over 120 stores including the Banana Republic Factory Store, Nordstrom Rack, Neiman Marcus Last Call, H&M, Steve Madden, DKNY, Adidas, and more. The Outlets at Orange also features the Vans Off the Wall Skatepark, a 20,000 square foot indoor/outdoor facility that includes a pool, street course, ramps, and other obstacles for skaters and BMXers to ride for free.

The City of Orange includes plenty of natural, undeveloped areas that offer outdoor enthusiasts the opportunity to get outside and explore nature in Orange County with trails for hikers, equestrians, and mountain bikers of all skill levels. Santiago Oaks Regional Park offers miles of trails, a historic dam to explore, a kids playground, and picnic areas. Although this area was affected by a fire in 2017, it is still a popular destination and restoration efforts have revitalized the area. Irvine Regional Park is one of the most visited regional parks in Orange County. In addition to the traditional park amenities like picnic areas, playgrounds, and open space, they have a 1/3 scale railroad that takes guests on a short ride around a portion of the park, a stocked lake for fishing, pony rides, and an educational area that is used by schools and youth groups to educate students about California history with hands on activities like exploring a mine shaft and panning for gold. Irvine Regional Park is also home to the Orange County Zoo, a small zoo that features a selection of animals, many of whom were rescues that can not be returned to the wild. Peters Canyon Regional Park is another destination in Orange that is popular for hiking, mountain biking, and equestrians. Peters Canyon lacks traditional park amenities and is used primarily for the trails.

Chapman University, located near Old Towne Orange,  relocated to the city in 1954 when the college purchased the old Orange Union High School Campus. Chapman has consistently ranked as one of the best schools in the West and has over 8,000 students with more than 50 graduate and undergraduate programs including business, film, and education. Visitors to the college campus can pay a visit to the California’s Gold Exhibit and Huell Howser Archives, located in the basement of Leatherby Libraries. The exhibit is open to the public and includes images, texts, and artifacts that were collected during the years of the popular public television program California’s Gold. The show ran for 24 seasons and aired 443 episodes highlighting locations and destinations around the state of California, led by Huell Howser who brought California history and exploration into the homes of millions of people.

While orange is not a major commercial or industrial hub, there is still a significant business presence in the area, especially near the freeways. The largest employers from the city include UC Irvine Medical Center, Sisters of St Joseph Hospital, Children’s Hospital of Orange County, Orange County Transportation Authority, and Chapman University.

In 1869, lawyers Alfred Chapman and Andrew Glassell received 1,385 acres of land from Rancho Santiago de Santa Ana as payment for legal fees. They designed a one square-mile town with 10-acre farm lots around a 40-acre town site. The Plaza, which sat at the center of the town site, became the symbol of the community and still is to this day.  Rancho Santiago de Santa Ana was owned by family members of Juan Pablo Grijalva, the first landholder in the area who received the property in 1801 from the Spanish Colonial Government. In the 1860s the land was divided into 1,000 units and divided among Grijalva’s heirs and claimants from a law suit filed against an extended family member.

Chapman and Glassell had purchased additional land from the Rancho and by 1870 they owned nearly 5,400 acres in the area we now know as Downtown Orange. A surveyor hired by Chapman divided the land into 40, 80, and 120 acre tracts and named the area Richland, after the rich soil that was fed by the water of the nearby Santa Ana River. Andrew Glassell’s brother, Captain William T. Glassell, led the development of the city, laying out the streets around the Downtown Area and supervising the construction of the A.B. Chapman Canal. Captain Glassell’s home and office was the first building in the area, located on the west side of the Plaza Square, and by 1871, there were a dozen other homes in Richland. The first one-room school house opened on the corner of Sycamore and Lemon in 1872, and the first local store, Fisher Brothers, opened in 1873 on the north side of the plaza. In 1875, Richland was renamed Orange because there was already a Richland located in Sacramento County. The City of Orange was primarily an agricultural community, with the first farmers planting crops of barley, corn, oats, rye, and wheat. Others planted grapes, used for raisins. The grapes were successful until they were destroyed by the blight of 1886. Tropical fruits such as pineapple, bananas, and guava were unsuccessful, and in 1873, orange groves were planted while farmers maintained a few other crops.

The Southern Pacific Railroad built a depot in Orange in 1880, and the Santa Fe Railroad rolled into town seven years later leading to the boom of the 1880s. People began moving in at a much quicker rate, and the town grew to accommodate the growing population. By 1885, asphalt sidewalks and gas streetlamps went in and streetcars began running through the area. The first bank, the Bank of Orange, opened in 1886 along with the fountain at the center of the Plaza. Orange was incorporated in 1888 with a population of 600.

Orange remained primarily an agricultural community, but the area was challenged by the Freeze of 1913 and the Floods of 1916. By 1920, the orange groves had matured and they became the primary crop for the area, producing more than $12 million in oranges by 1929. The onset of the Great Depression ushered in more challenges with the fall of the price of citrus, and another round of freezing and flooding in the late 1930s brought the town into economic decline like much of the rest of the United States.

After WWII, the town again began to grow, and has continued to do so steadily over the years. Today the City of Orange is home to a well respected university, many successful businesses, attractive neighborhoods, and a popular downtown area. The City of Orange offers a sense of community and small town values.

Things to Do in Orange