The City of Fullerton is home to Fullerton College and Cal State University Fullerton. The city is rich in history with numerous historic buildings still on display and in use in the downtown area. The revitalization of the SOCO District in downtown Fullerton adds to the city’s appeal, creating a hub for locals and visitors to enjoy the shops, restaurants, and nightlife of the unique Orange County city. The nearby Fullerton Transportation Center makes for easy travel to and from the area. Fullerton is located in the north-east section of Orange County and is bordered by Buena Park, La Habra, Placentia, and Anaheim. The Fullerton profile includes city history and information for residential services, shopping, dining, and points of interest throughout the city. 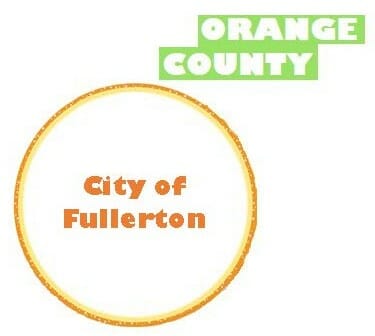 The city of Fullerton is a suburban and commercial community located in the north-east section of Orange County, California approximately 25 miles from Los Angeles. Fullerton is a bustling city with a large student population from Cal State University Fullerton, Fullerton College, and other educational institutions in the area. The city is a well rounded community for individuals and families, offering a diverse selection of recreational activities. The city boasts more than 50 community parks, two regional parks, an arboretum, and more than 28 miles of trails for hikers, mountain bikers, and equestrians. There are three community centers, a museum, libraries, a sports complex, the Janet Evans swim center, golf courses, and an equestrian center.

The city is rich in history, especially in the Downtown area, and many historic buildings are still in use today. Some of the most popular historic buildings include the Chapman Building, the Elephant Packing House, the Fox Theater Complex, and the Old Spaghetti Factory (which used to be a Union Pacific Depot). The Downtown Fullerton area has undergone a revitalization and a portion of the area is now referred to as the SOCO District (South of Commonwealth). The unique restaurants and shops invite residents and visitors to the area, offering easy access in and out of the city with the nearby transportation center. The restaurants and bars stay open late, serving food and drinks, and many offering live music, creating an entertaining nightlife destination. While you can find a selection of unique gift shops and boutiques downtown like Anatomic Rag and Roadkill Enterprises, more traditional shoppers will find what they need at one of the many shopping centers in the city like Fullerton Town Center, Amerige Heights Town Center, or Fullerton Metro Center. For additional entertainment, Fullerton is bordered by both Buena Park and Anaheim, offering easy access to nearby local attractions like Disneyland, Knott’s Berry Farm, and Medieval Times.

The city of Fullerton has a history of being an educational community. That is still reflected today with the significant number of educational institutions within the city limits. Fullerton has five colleges and universities including Cal State University Fullerton and Fullerton College, 15 public elementary schools, two public K-8 schools, three junior high schools, and five high schools.

The city of Fullerton was part of Rancho San Juan Cajon de Santa Ana from 1837 through the 1850s, when Juan Pacifico Ontiveros began selling parcels of land to settlers after the Gold Rush. In 1886, brothers George and Edward Amerige bought a portion of the land and began negotiations with George H. Fullerton to share interest in the area to establish a town site with shared interest and railroad access. The claim was officially staked in 1887 at what is now the intersection of Commonwealth and Harbor. Charles Chapman, a descendant of the famous “Johnny Appleseed” Chapman, purchased an orchard in town and planted the Valencia oranges from his previous ranch. The oranges thrived and Fullerton was established as an agricultural community with more orange groves than any other city in America. The area also produced avocados and walnuts.

In addition to agriculture, Fullerton was a destination for drilling. Petroleum was discovered in the Brea-Olinda Oil Field in 1880, and a boom to the area followed, growing the city and the population. The 1920s and 1930s brought the Fox Theater, The Muckenthaler House, Fullerton College, and Plummer Auditorium and Clock tower, among other things, and a sewer farm was converted into the Fullerton Municipal Airport.

After the depression, the city turned from agriculture to manufacturing and food processing, and much of the city transformed from farms into industrial areas. Post WWII brought another population boom to the area and many of the remaining farms were destroyed to create housing developments, new businesses, and new roads. Today the city of Fullerton is largely suburban and commercial.

Fullerton is often recognized as the birthplace of the electric guitar thanks to the development of the Fender Telecaster by local resident and inventor, Leo Fender. Visitors to the Fullerton Museum can learn more about Fender’s life and legacy and see some of his world famous guitars on display.

Ralph B. Clark Regional Park, located at the foot of the Coyote Hills, covers area in both Fullerton and Buena Park. The park offers insight into the city’s prehistoric past with fossils of mammoths, giant ground sloths, saber-toothed cats, and whales. The park’s interpretive center hosts several events throughout the year to give community members the opportunity to view the fossils and take part in hands-on activities to explore the history of the area and the animals that once roamed here.

Things to Do in Fullerton

The new exhibition, The Black Index, debuted at UC

Have you been on this popular hike? . Dripping cav

We miss the one on one time with the piglets, but