The city of Garden Grove in Orange County, California includes city history and information for residential services, shopping, dining, and points of interest throughout the city. Garden Grove is a small urban community within Orange County. Well known for the Crystal Cathedral and Annual Strawberry Festival at Village Green Park, the city is centrally located with easy access to many major Orange County destinations including Disneyland, Knott’s Berry Farm, and the beach. 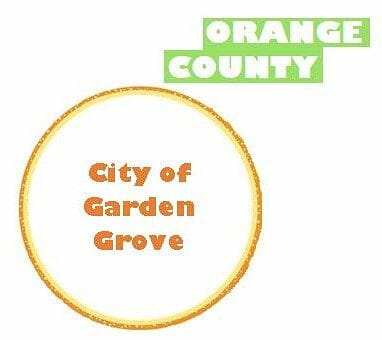 The City of Garden Grove is located in Orange County approximately 25 miles southeast of the city of Los Angeles, California. What began as a small farming community, has become a small urban city with thriving businesses and residential communities. While Garden Grove is a small city with very few major attractions of its own, it is within close proximity to several major cities and tourist destinations in southern California. The city of Anaheim borders Garden Grove to the north, putting Disneyland and California Adventure within a few minutes drive. A few miles farther to the north, Buena Park offers additional attractions like Knott’s Berry Farm, Soak City, Medieval Times, and the Pirate’s Dinner Adventure. To the east, Santa Ana and Orange provide a wealth of shopping and dining options, museums, and historic downtown districts that are lively destinations for locals and visitors. To the south and the west, Garden Grove butts up against the beach cities and residents need only drive a few minutes to enjoy the sun and sand on the beautiful beaches of Orange County, with Seal Beach and Huntington Beach being the closest in proximity.

Garden Grove’s most popular attraction is Christ Cathedral (formerly Crystal Cathedral), a 34-acre campus for the faithful and spiritual center for the Christian Community. While there are several buildings on the complex including a cemetery and mausoleum, the star is the towering Prayer Spire. The Prayer Spire, built in 1980, is made of over 10,000 rectangular panes of glass attached to the structure with a silicone glue at a whopping $18 Million to build. The Hour Of Power, a weekly evangelical television show, was recorded here and has the ability to seat over 2,000 people.

In 2016, Garden Grove became the home of the new Great Wolf Lodge, an indoor water park and resort for families. It is a welcome addition to the community, offering year-round water park fun for both local residents and visitors from afar.

The historic Garden Grove Main Street offers a selection of shopping and dining, with several antique stores and one of a kind shops. There are many other strip mall style shopping centers within the city of Garden Grove, but for major shopping districts or indoor/outdoor malls, shoppers will venture just outside of the city to destinations such as the Outlets at Orange, Main Place Mall in Santa Ana, or The Shops at Rossmoor.

The city of Garden Grove is predominantly Asian and Hispanic and offers endless options to enjoy the food of these rich and diverse cultures. You won’t have to look far to find restaurants with traditional Korean or Vietnamese cuisine or a taqueria that offers authentic tacos, flautas, and pozole.

The area of Garden Grove was explored in 1769 during the expedition of Gaspar de Portola and was originally part of the Spanish land grant, Rancho Los Nietos in 1784. In 1874, Alonzo Cook officially settled the city and began a small farming community. Growth was slow until the arrival of the railroad in 1905. The city grew, but not overwhelmingly and agriculture continued to be the primary use of the town with oranges, walnuts, chili peppers, and strawberries being the most common crops in the area.

Garden Grove has suffered from two major disasters in the past. The first in 1916 when a flood left the city covered in several  feet of water. The second in 1933 when the 6.4 magnitude Long Beach Earthquake shook the southland, destroying many of the older sections and buildings of the city. Some of the remaining historic buildings can be seen on Main Street.

After World War II, the city experienced another population boom when servicemen from nearby Southern California Military Bases settled into surrounding communities to look for work and start families. The City of Garden Grove was incorporated in 1956 with a population of 44,000.

For more local history, schedule a tour at the Stanley Ranch Museum. Operated by the Garden Grove Historical Society, visitors can schedule a tour to explore nearly 20 historic buildings from the late 1800s and early 1900s. A Victorian farmhouse, a barbershop, a dentist office, a fire station with Garden Grove’s first fire truck, and Walt Disney’s garage, complete with old cameras and memorabilia with Mickey and Minnie are among the gems that visitors will see.

Things to Do in Garden Grove

Looking for something different to do this weekend

We're so excited to see live music making it back