The City of Santa Ana was established in 1869, becoming the county seat of Orange County when it split from Los Angeles in 1889. Santa Ana is approximately 33 miles south of the city of Los Angeles and contains many historic buildings within the Downtown Historic District which is a central location for shopping, dining, and the arts. The profile for the city of Santa Ana in Orange County, California includes city history and information for residential services, shopping, dining, and points of interest throughout the city. 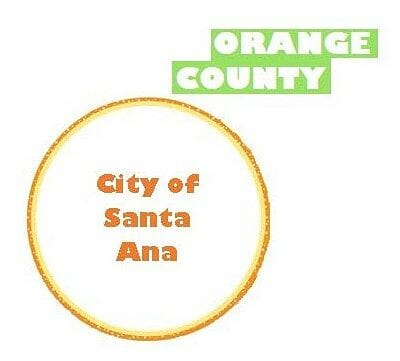 The city of Santa Ana is a busy, urban area with close ties to the foundation of Orange County, being the county seat, and still containing the major government facilities such as the Superior Courthouse and Civic Center. The original courthouse still stands, providing limited government services such as birth certificates, wedding ceremonies, and passports. The Old Orange County Courthouse also serves as a museum and offers regular tours to share the history of the city and Orange County.

The Historic Downtown District in Santa Ana is loosely bounded by Civic Center Drive, 1st Street, Ross, & Spurgeon Streets. Placed on the National Register of Historic Places in 1984, there has been a consistent effort placed on maintaining the historic areas of the city, creating a central location for nightlife, shopping, dining, and entertainment for residents and visitors to enjoy. Downtown Santa Ana hosts many community events including the farmers market, the Artwalk, Savor Santa Ana, and music nights. Also located in downtown Santa Ana is the Artist’s Village – a flourishing art community with galleries, studios, creative small businesses, dining, and residential space. The Cal State Fullerton’s Grand Central Art Center and the Orange County Center for Contemporary Art are just steps away.

In addition to the Downtown District and Artist’s Village, Santa Ana offers many other cultural and educational facilities to the public including Bower’s Museum, Discovery Cube Orange County, the Heritage Museum of Orange County, the Lyon Air Museum, and the Santa Ana Zoo.

MainPlace Mall is the major destination for shopping in Santa Ana. Originally built in 1958 as Fashion Square Mall, the shopping center was completely renovated in 1987. There is a long list of stores, service providers, and restaurants including mall standards JcPenney, Hot Topic, Macy’s and Express. You can always catch a movie at the theater at MainPlace Mall and enjoy dinner at one of the many options including Lucielle’s Smokehouse, Blaze Pizza, California Pizza Kitchen, and Genki Sushi. Also at MainPlace Mall, you can enjoy hours of fun at Round 1 Amusement – a huge indoor entertainment destination with bowling, billiards, an arcade, a kid zone, darts, karaoke, and more. For live music enthusiasts, the Observatory and Constellation Room is the place to be for concerts of all genres from local artists to major headliners.

Santa Ana is packed with business and industry, from hotels and restaurants, to factories and medical facilities. It is also the home of the John Wayne International Airport, the primary airport of Orange County. John Wayne airport provides transportation for business and pleasure to destinations all over the world and features the Lyon Air Museum, an air museum featuring historic vehicles and aircraft including military motorcycles and vehicles.

The largest employers in the city are the County of Orange, Santa Ana Unified School District, Santa Ana College, First American Title Company, the City of Santa Ana, KPC Healthcare, the Superior Court of CA-County of Orange, the US Postal Service, and Johnson & Johnson.

Santa Ana was discovered by Don Gaspar de Portola in 1769. Soon after, Jose Antonio Yorba and Juan Peralta established Rancho Santiago de Santa Ana. They grazed cattle and raised crops on the fertile soil in the Southern California valley. William Spurgeon purchased 70 acres of the land in 1869 from the Yorba family and established the new townsite of Santa Ana. The city became the County Seat of Orange County in 1889 when the area split from Los Angeles County. The Southern Pacific Railroad extended a train route to Santa Ana in 1877.

Santa Ana’s population growth is partly attributed to the Santa Ana Army Air Base  that was built here as a training center during World War II for the U.S. Air Force. After the war, many veterans moved to Santa Ana and the surrounding cities of Orange County.

Like most areas, Santa Ana originally offered fertile soil for farming. Backyard gardens were common, and there were celery fields and raisin vineyards were found here. Today the city is predominantly urban with office buildings, industrial areas, and residential tracts.

Things to Do in Santa Ana

One of my favorite local artists has some amazing

Getting ready for some safe and sane fun. 😉🎇