Please report any shark sighting, encounter, or attack by contacting us. Images and video are a plus!

Go to the map to see locations of shark sightings. Where available shark videos of the sightings are included.

October 6, 2019 – In the water near Catalina Island, A 19-foot Great White Shark bit into a scuba divers kayak, leaving two 2-inch long teeth behind. No one was injured in the event.

September 29, 2018 – A 13-year-old boy was critically injured after being attacked Saturday by a shark off the coast of Encinitas, California and near Beacon’s Beach. The shark attack occurred about 150 feet off shore during the first day of lobster season and the boy’s first time lobster fishing. The shark was estimated to be 11 feet long but the type of shark is not known.

May 3, 2017 – A surfer who initially thought she was cut by the fin on her surfboard was bitten by a shark in shallow water off Sunset Beach, a doctor determined. 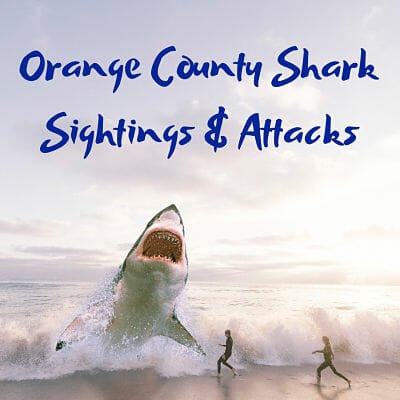 April 29, 2017 – At San Onofre State Beach a 10- to 12-foot shark sunk its teeth into woman’s leg and pulled her underwater. She survived. Shark victim video interview.

May 29, 2016 – A woman swimming at Corona Del Mar State Beach was bitten by a shark on her torso and shoulder. She was able to get out of the water and survived the attack. News coverage of shark attack.

August 27, 2020 – A group of kayakers told authorities they spotted a great white shark, about 10 feet long, off the coast of Huntington Beach, about 400 yards from shore. Officials posted shark advisory signs along the beach.

August 14, 2020 – A 3- to 4-foot thresher shark that appeared to have injuries consistent with being hit by a boat propeller was euthanized by animal control officials near the Balboa Pier.

May 20, 2020 – Shark-sighting advisory signs posted at San Clemente pier warning visitors that one had been seen nearby.

May 19, 2020 – A surfer at Lower Trestles spotted a shark swimming nearby while he was waiting for waves.

April 27, 2020 – A stand-up paddle boarder got a nice surprise when this juvenile grey whale surfaced next to him.

January 12, 2020 – Captain Steve Locken of RockenReel Sportfishing in Dana Point reported the recent appearance of dozens of Blue Sharks, including the catch and release of an 8-foot Blue Shark two miles offshore from Dana Point Harbor.

October 12, 2019 – According a reader lifeguards reported a 6 foot shark sighting at the San Clemente Pier around 4 pm. The lifeguards issued a verbal shark advisory over the loudspeaker, but did not put any signs up. About 1/2 the people stayed in the water.

September 7, 2019 – A camera set up on the south side of the Huntington Beach pier caught a Great White Shark Triple Jump.

August 21, 2019 – Several great white sharks patrolling the coastline off Dana Point (Capistrano Beach) today. The guys on hydro foils had no clue about the sharks until one guy on a jet ski noticed one right next to him.

August 8, 2019 –  Around 7 am a visitor to Sunset Beach reported two sharks about 100-150 feet from shore at the 10th Street beach access. Surfers were call in nearby.

June 19, 2019 – A 6-8 foot juvenile shark breached the water near Trestles in San Clemente, shutting down the USA Surfing Championships until the water was cleared.

May 20, 2019 – A basking shark, the second-largest living shark, after the whale shark, was spotted by a whale watching crew aboard Capt. Dave’s Dolphin and Whale Safari.

April 13, 2019 – A thresher shark is caught off the Huntington Beach Pier.

April 9, 2019 – A leopard shark was caught and released off the San Clemente pier.

February 23, 2019 – Surfers spotted a 7 foot shark swimming within a few feet of them at Bolsa Chica State Beach.

February 18, 2019 – An approximate 6 to 7 foot shark bumped a surfer’s board and leg at Dog Beach in Huntington Beach.

September 25, 2018 – Throughout the month of September Orcas were spotted off the Orange County coast. See the under water video of CA51 transient type Orcas off Newport Beach.

August 24, 2018 – A 14-year old boy was bumped by a shark while playing in the water around 8:00 p.m. south of the Huntington Beach Pier. The water was about four feet deep and the boy was not injured. They inspected the area and re-opened the beach the following morning at 11:00 a.m.

July 24, 2018 – An angler fishing from the shore at Capistrano Beach in San Clemente accidentally hooks and reels in a 6-foot great white shark. Four men helped remove the hook from the shark’s mouth and the fisherman pulled the shark back into the water to release it.

July 2018 – Amazing video of a baby Great White Shark at Capistrano Park Beach. It was caught unintentionally and released.

June 6, 2018 – A young girl was body boarding in the waves in Huntington Beach when her mother spotted two black fins that were approximately 4-feet tall in the water behind her daughter. She said they were definitely not dolphins because of the shallow water and swimming motion. She removed her daughter from the water immediately.

March 5, 2018 – A shark possibly longer than eight feet was spotted off the San Clemente Pier prompting a beach closxure.

February 2018 – A juvenile five-foot white shark was a regular off the coast of Huntington Beach.

January 24, 2018 – The same white shark from 1/14/18 was detected by the Newport Pier acoustic receiver two times around 11:30pm. This shark was first tagged in Belmont Shores. *

November 22, 2017 – A 6-foot great white shark was snagged off the San Clemente Pier this week, before it was able to break free from the line and swim away.

August 27, 2017 – A woman filmed a 10-foot great white as it casually cruised next to the San Clemente Pier.

August 9, 2017 – A four-hour ocean closure occurred after about 10 people spotted an estimated 10-foot shark from the San Clemente Pier.

August 8, 2017 – Not a shark but a juvenile Gray way swims near the shoreline next to unsuspecting swimmers in Aliso Beach at Laguna Beach.

August 5, 2017 – A surfer reported seeing a shark close to the Linda Lane beach shore in San Clemente prompting a beach closure. The shark was estimated to be about 10- to 11-feet.

August 2017 – Fisherman shark fishing off the San Clemente pier and filleting them.

July 16, 2017 – At 7:40 pm a great white shark breaches on the northside of the Huntington Beach pier and caught on video.

June 3, 2017 – Paddle boarder collides a with shark. No attack occurred.

May 22, 2017 – Fishermen at San Clemente Pier wrangled with a 10-12 foot shark that tried to take their bait. The beach was closed following this incident.

May 11, 2017 – Police helicopter spotted and captured on video numerous sharks close to beachgoers in San Clemente.

May 2017 – Kayakers mixing it up with great white sharks in the surfline in San Clemente on video.

May 2017 – Shark filmed swimming near a boat in San Clemente, California.

May 2017 – A boater on a skiff films a great white shark circling the skiff in Dana Point.

March 8, 2017 – An estimated eight-foot shark was seen swimming near 36th Street approximately 200-yards off shore. It was not acting aggressively, but lifeguards closed ocean access between the Newport Pier and 56th Street. *

February 21, 2017 – A fisherman on the Huntington Beach Pier caught what appeared to be a baby great white shark about 7 feet long. Instead of cutting the line per fishing laws, they gaffed the shark to bring it onto the pier and they took photos with the shark.

February 14, 2017 – A fisherman began to reel up what he thought was a 7-foot great white shark on the end of the Huntington Beach Pier. The fishing line broke and the shark swam away.

January 6, 2017 – A 9-10 foot shark was spotted off the pier Sunday in the ocean off Huntington Beach Pier which led authorities to shut down a surf contest.

With the increase in shark sightings, it is important for people to know what to do in the event of a shark attack. Here are a few tips:

According to the Shark Research Committee there were 9 authenticated unprovoked shark attacks (all believed to be Great White Sharks) reported from the Pacific Coast of North America during 2017, with none fatal. Activities of the victims were; Kayaking 4, Surfing 2, Paddleboarding 1, Freediving 1, and Swimming 1.

Spring is shark pupping season and it’s likely more juvenile sharks will be close to shore through the summer. Newborn sharks are not thought to be dangerous to humans, sticking close to shore to feed on stingrays and other small fish. It’s only when they get older and bigger that they start investigating and feeding on larger mammals like seals and sea lions.

Water temperature can affect shark migrations. For instance, if water temperatures stay warm than older sharks may decide to stay through the fall and winter seasons.

The City of Seal Beach Shark and Ocean Safety page has useful information.

Learn about shark behavior at the CSULB Shark Lab.

Learn about shark attacks world wide at the Florida Museum of Natural History.

The Great White sharks are the only confirmed shark attacks in Orange County. The two main population centers for adult Great White Sharks is the Farallon Islands off of San Francisco and Mexico’s Guadalupe Island. White sharks are protected from being caught in California since 1994.

According to the Guinness Book of Records, the two largest great white sharks ever found were 36′ and 37′ feet long.

Please report any shark sighting, encounter, or attack by contacting us. Images and video are a plus!

We've been fortunate enough to meet some of the me

#Fridayfun - How are you kicking off the weekend?

Found some blue sky this morning! Not sure how lon