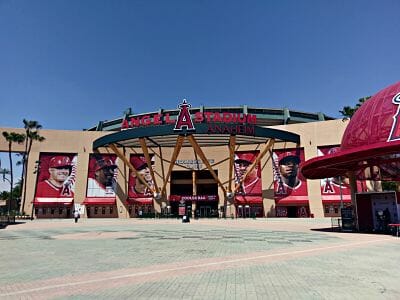 Anaheim Ducks at the Honda Center

The Honda Center hosts all home games for the Anaheim Ducks from September through April. During hockey season, the Honda Center can accommodate just over 17,000 fans to watch their favorite team on the ice. During the off season, Honda Center hosts a variety of other concerts and events including musical guests like Depeche Mode and Pink, and family events like the Harlem Globe Trotters, Disney on Ice, WWE Summerslam, and Nitro Circus. Honda Center also hosts the Big West Basketball Tournament.

Angel Stadium of Anaheim is the home stadium to the Los Angeles Angels. Opened in 1966, the stadium has hosted numerous baseball teams and events. Today, all of the Angels’ home games are played here from April through September. The stadium has a seating capacity of just over 45,000. In the offseason, Angel Stadium hosts other sporting events like Monster Jam.

Get ready for the event of the season. Monster Jam is back again at Angel Stadium for another monstrous showdown.  Monster Jam is a live motorsport event that features massive modified trucks competing in races, obstacle courses, freestyle events, and more. Observers will enjoy the action-packed competition full of wheelies, jumps, and roaring engines. Bring ear protection of you have sensitive ears because this event gets loud! After the event, head out to the arena to meet the drivers of monster trucks like Grave Digger, Megalodon, El Toro Loco, and Whiplash.

The Orange County Fairgrounds and Event Center features a variety of sporting events year round, with a little extra fun in the summer. Fight Club OC is a Pro Boxing and Pro MMA event featuring 40-foot big screens to watch the action. Events are held in the Hangar. Costa Mesa Speedway features live action motorcycle racing including Harleys, sidecars, and juniors. Extreme Freestyle Moto-X features motorcycle riders battling it out in races and performing extreme stunts in the air and in the dirt. You can even watch the Broncs & Bulls Rodeo and the Monster Truck Destruction Tour here at the OC fairgrounds. An exciting but less well known event at the OC Fairgrounds is the Motorhome Destruction Derby. Come out and watch these motorhomes make a mash-up mess. Check the OC Fair Events Calendar to find fun events for the whole family. In addition to year round events, there is a packed calendar during the Orange County Fair.

Vans US Open of Surfing

Every summer, the Vans US Open of Surfing hits the sand and sea in Huntington Beach. Downtown is taken over by visitors in bikinis and board shorts and the pier is packed with onlookers to see who can catch the best wave. the 2019 event is slated to be held from July 27th through August 4th. The event runs daily from 6:00 am to 7:00 pm. General admission is free but some areas may require a fee for participation. Skateboarding and BMX exhibitions are often part of the event. Don’t miss the outdoor movies, vendors, art displays, musical guests, and athlete meet & greet sessions. Across from the pier, skaters can enjoy even more shreding at the Bones Love Milk event.

Interesting fact: A shark will only attack you if

We're so excited about the opening of @herbandranc

We will walk in the light of creative altruism or