Orange County homes of celebrities (current and former) from Newport Beach to Anaheim we show where celebrities grew up, lived and sold homes. We’ve even a got a celebrity homes map.

Go to the map to see locations of Orange County celebrity homes map.

Celebrities who live in Anaheim

The former child hood home of the No Doubt singer rehearsed, recorded and filmed some of The Beacon Street Collection in the garage.

Celebrities who live in Costa Mesa

Tarek El Moussa bought a 3,010-square-foot Costa Mesa house with a master suite opening to a deck and swimming pool for $2.28 million in 2018.

Tamra Judge, a cast member from “The Real Housewives of Orange County,” purchased a home in the master-planned Coto De Caza community in October 2018. The 4,840 square foot home features six bedrooms, four bathrooms, an oversized lot, a pool and a spa.

Celebrities who live in Cypress

This 3 bedroom, 2 bath home probably wouldn’t fit Tiger’s lifestyle now but this is where he grew up while honing skills at the Navy Golf course.

Celebrities who live in Dana Point

Basketball legend Magic Johnson purchased the Mediterranean three-story mansion in 2007 for $7.6 million. The Johnson family uses the Dana Point abode as their vacation home. The mansion features expansive views of the Pacific Ocean and Catalina Island, a pool, a home theater, an elevator, and a wine cellar.

Celebrities who live in Ladera Ranch

Tamra Judge, a cast member on “The Real Housewives of Orange County” purchased the 3,930 square foot, five bedroom home in 2017. After a streak of bad luck,  Judge decided the house was jinxed so she purchased a new home in Coto De Caza in October 2018.

Celebrities who live in Laguna Beach 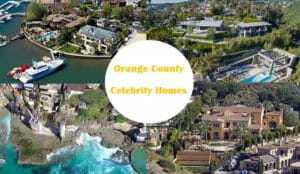 Bette Davis’s California English Tudor home in Wood’s Cove and built in 1929 is registered as a historic structure. This home has 4,503 square feet, 4 beds and 6 baths with a lot size of 7,918 square feet.

Located in Laguna’s Victoria Beach, the landmark beach cottage known as Norman House, for it’s Norman-style architecture, was once owned the the actress singer. There is also an accompanying ‘pirate tower’, La Tour, that was built in 1926 for beach access.

Admittedly the home is probably more notable then the person who some have labeled “the man who invented Hollywood.” Built in 1929 in Three Arch Bay this nearly an acre oceanfront estate has a functional lighthouse overlooking a private beach.

Post The Hills LC bought a home of her own in lower Three Arch Bays. The “lower” homes are located on the ocean side of the Three Arch Bay gated community

In 2014 LC moved down the street to this $8.5 million oceanfront estate. This home features 4 beds, 3 baths on a half acre.

Known as the old Mossimo estate, fashion mogul Mossimo Giannulli, who sold his namesake brand in 2006 and the “Fuller House” actress once occupied this contemporary Craftsman.

Mark Cuban purchased the six bedroom, ten bathroom Laguna Beach mansion for $19 million. The 7,867 square-foot home includes ocean views and disappearing glass and mahogany doors for a unique indoor/outdoor coastal living experience. The home also features a pool, wine cellar, gym, and media room. As one of the Montage Resort Residences, they also have access to the Montage Resort amenities including room service, the spa, pool access, and more.

Screenwriter and director Ryan Murphy purchased this home in 2004 and is currently selling it for $18.75 million. The 6,500-square-foot main house and a separate guesthouse sits on an acre lot with ocean views.

The three-story home located in the gated Emerald Bay community, which Buffett frequented during the holidays, was originally purchased in 1971 for $150,000. The home itself spans roughly 3,500 square feet and is located in Emerald Bay, a high-end gated community with brilliant views of the beach.

Celebrities who live in Newport Beach

Former actor Buddy Ebsen, best known for his role in “The Beverly Hillbillies”, lived on Balboa Island for over 20 years. The home sold in 2015 and has since been demolished and rebuilt.

Following her divorce this “Flip or Flop” star shelled out $4.1 million for a 4,870-square-foot, four-bedroom, four-bath home in Newport Beach, CA.

Author Dean Koontz has lived in several homes in the Newport Beach area but this approximately 27,000 square foot estate located in the gated community of Pelican Hills is perhaps his last home or not. Koontz also bought a “smaller” home on the same street in 2018 at 33 Canyon Terrace.

At the tip of the Balboa peninsula and known as the “King Gillette Mansion” because it was built by King G., although he never lived there. The house has a lot of history and much of it is not true but it is true Dick Dale lived here until he lost the home due to bankruptcy in the 1980s.

Helena Modjeska was an internationally known actress who retired on Bay Island when she purchased 3 Bay Island from Sam Tustin, the founder of the City of Tustin, for $2,400. Bay Island has 23 homes on 5.5 acres and includes a tennis court, botanical garden, private beach and no cars are allowed on the island. The original home was demolished in the mid-1940s and replaced with the home that sits there today.

Acclaimed architect John Lautner designed this one of a kind home on Balboa Island which locals called the “Jaws House”. Built in 1979, the home has 2,100 square feet, three bedrooms and an elevator.

John Wayne used to live here but the former one-story, 7,105-square-foot residence was demolished to make room for a two-story house with a three-car garage on the 36,000-square-foot lot.

A residence formerly owned by John Wayne in the Big Canyon area of Newport Beach sold for $3.6 million in 2014, the former home of the late actor had original parquet flooring, a modern kitchen, and a fire pit at the time of the sale.

Kobe Bryant’s Pelican Ridge home sold in 2015 for $6,116,500. It is one of several homes owned by the basketball player in the Newport area. The home features 8,500 square feet of living space, unobstructed ocean views, a hair salon, library with a shark tank, a home theater, extra deep pool with waterfall features, and an outdoor BBQ area.

In 2005, the actor purchased this waterfront residence next to John Wayne’s former home on Newport Harbor. He sold home, with over one half acre looking across the widest expanse of the bay, in 2007 for $35 million.

The Shark Tank investor, Herjavec purchased the waterfront Balboa Peninsula home for $7.95 million in November 2018. The 3,550 square-foot home underwent a renovation in 2017 and features four bedrooms and 3 1/2 baths with French Oak flooring, custom stonework, and a picture window in the master suite overlooking the water. The home includes a private dock.

Many local residents know this home well for its “pan-Asian” style at the tip of Bay Island with a 70-foot-long boat dock, an elevator, five bedrooms and seven bathrooms. Before this home was erected Roy Rogers lived here at 12 Bay Island and for some it is still referred to as the Roy Rogers house.

At the time of the sale of this home it was labeled Tiger’s “love lair” referring to where some of his affairs might have taken place. Tiger sold this town-house-style overlooking the Pacific Ocean in 2012 for $2.21 and less than what he paid for it.

Tré Cool, the Green Day drummer once lived at this duplex built in 1978. The home includes a lower unit that holds two bedrooms, two bathrooms and a family room with a brick fireplace.

Celebrities who live in San Clemente

La Casa Pacifica, also known as Richard Nixon’s Western White House, was purchased by Nixon in 1969. He sold the home in 1980 when he relocated to New York. The estate included 15,000 square feet of living space, including a 9,000 square foot main house. La Casa Pacifica is situated on 5.45 acres overlooking the pacific ocean with 450 feet of beach and features an ocean front swimming pool. In addition to the main house, the property includes an entertainment pavilion, a two-bedroom guest house, and accommodations for staff. The property was most recently listed for $63.5 million.

Alexis Bellino, a former Orange County “Real Housewife” once lived at this gated estate in a private oasis complete with a resort style backyard, large pool, spa, Bocce Court, full covered outdoor kitchen and bar that sits up to twenty people, horse stables and corrals, an immense orchard, a stunning 8 car show garage, 2 bedroom guesthouse, billiards room and gourmet kitchen all while perfectly tucked away on nearly a 3 acre piece of flat land.

Larry H. Parker promises to “fight for you” but not for his 9,218-square-foot estate on nearly eight acres which he sold for $3.8 million. This was considerably less than his original asking price in 2018.

Celebrities who live in Tustin

The rustic Tustin Estate on Lemon Heights Drive was owned by legendary martial arts actor Chuck Norris in the 1980s. The large lot features a primary home with 5,500 square feet of living space, a guest house, a lake, a saltwater swimming pool, and plenty of trees that were added by Mr. Norris. He eventually sold the home to pop star Tiffany. The home was for sale in 2016 for $3.5 million.

The Tustin Ranch home on Bronzewood Drive was owned by Anaheim Ducks player Ryan Getzlaf from 2010 to 2016. The 6,900 square-foot five bedroom home is on a lot that is just under one acre in a guard gated community. The home was built in 2002 and features a Pebble Tec pool and spa, putting green sport court, covered pations, built in barbecue, and an outdoor fireplace. Interior features include wood and quartz floors, a wine cellar, theater, custom dark cherrywood cabinets, and more. Getzlaf purchased the home for $3.76 million and it sold for $3.75 million

Bought in 2013 for $2 million, the former couple unloaded this property for just under $3 million. Some might call this was a flop as they said they sank $1.5 million in remodeling.