There are a total of 32 dams in Orange County. The ownership ranges from the Federal government to Home Owners Associations. These dams hold billions of gallons of water in reservoirs. The major reservoirs are designed to protect Southern California from flood waters and to store domestic water. Their sizes range from 18 acre-feet to 196,235 acre-feet (Prado Dam) holding capacity. 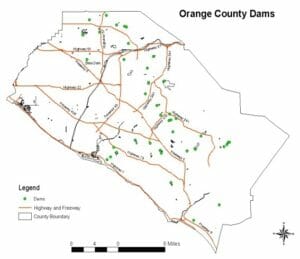 Santiago Dam is an earth-fill structure with a 25,000 acre-feet capacity reservoir (Irvine Lake). The dam is jointly owned by the Orange County and the Serrano Water District. Construction on the dam started in 1929 with a joint venture by the Irvine Company and Serrano Irrigation District. After the site was graded, the dam was built using dirt and rock excavated from the sides of the canyon and from the streambed both above and below the dam site. In the late 1930s, the lake was stocked with fish, and was opened to the public for recreational use in 1941. The dam was built to serve the purpose of flood control, irrigation and municipal water use.

Villa Park Dam is a flood control dam located downstream from Santiago Dam. It is an earth-fill structure (embankment dam) with a capacity of 15,600 acre-feet and is owned by the Orange County Flood Control District. Along with the upstream Santiago Dam, the dam serves primarily for flood control for the cities of Villa Park, Orange, Tustin and Santa Ana and also regulates the inflow of Santiago Creek into the Santa Ana River.

Rattlesnake Dam is an earth-filled structure with a storage capacity of about 1,700 acre-feet with a surface area of approximately 46 acres. The reservoir is owned by the Irvine Ranch Water District and is presently being used for the storage of pressure pipe treated sewage effluent which in turn is used for irrigation.

Walnut Canyon Reservoir is an earth-filled asphalt lined structure owned by the City of Anaheim and is operated by the Anaheim Water Department. The Olive Hills reservoir has a storage capacity of about 197 acre-feet with a surface area of approximately 555 sq. feet. The reservoir presently is used for the storage of potable water for use by residents of the City of Anaheim.

Sulpher Creek Dam is an earth-filled structure owned by Orange County. It has a capacity of 382 acre-feet and maintained at a water surface elevation of 189 feet above MSL.

Peters Canyon Dam is an earth-filled structure owned by Orange County and has a capacity of 626 acre-feet at the spillway pipe elevation of 537 feet MSL. Water stored varies from 200 acrefeet to 600 acre-feet depending on seasonal rain amounts. The dam is located approximately 3 miles westerly of Santiago Dam, near the upper part of the Peters Canyon watershed. Irvine constructed an earth-fill dam, 50 foot high with 700 acre-feet of capacity. Its purpose is to regulate the draft from Santiago Dam (Irvine Lake) to lower reservoirs. Distribution to southerly Irvine Ranch was via underground pipeline for one mile to the “High Line Canal. The open channel then carried the flow by gravity several miles easterly across the ranch.

This lake is in Riverside County. It is owned by the Metropolitan Water District in Riverside and a major source of water for Southern California. Diamond Valley Lake is a man-made off stream reservoir located near Hemet, California. It is one of the largest reservoirs in Southern California and also one of the newest. With a capacity of 800,000 acre feet (990,000,000 m3) (four times that of Prado Dam), the lake nearly doubled the area’s surface water storage capacity and provides additional water supplies for drought, peak summer, and emergency needs. The Metropolitan Water District of Southern California began the $1.9 billion construction project in 1995. Filling of the lake, by way of the Colorado River Aqueduct, began in 1999 and was completed in 2003. The lake is currently served by the Inland Feeder. The lake features three earth fill dams, two located on either side of the valley and one on the north rim.

Prado Dam was completed in April 1941. It is located at the upper end of the Lower Santa Ana River Canyon, which is a natural constriction controlling 2,255 square miles (5,840 square kilometers) of the 2,450 square mile (6,345 square kilometer) Santa Ana River watershed. Prado Dam is owned and operated by the Los Angeles District, Corps of Engineers, and was constructed for the primary purpose of providing protection from floods for the metropolitan areas in Orange County. Prado Dam provides flood control and water conservation storage for Orange County. It is the downstream element of the Santa Ana River flood control system. The purpose of the project is to collect runoff from the uncontrolled drainage areas upstream along with releases from other storage facilities.

The Seven Oaks Dam is located above Prado dam and feeds in to Prado Dam; Prado Dam feeds into the Santa Ana River; the Santa Ana River flows through the Cities of Orange and Santa Ana, to Huntington Beach and out to the ocean. Seven Oaks Dam is one of the largest earth and rock filled dams in the world. It is as high as a fifty story building and ten football fields in length from side to side. Situated between the north and south branches of the San Andreas Fault, the dam has been designed to withstand an earthquake of eight plus on the Richter scale. Seven Oaks Dam is a zoned earth and rock fill dam with a maximum height of 550 feet above the existing streambed at the dam axis and 650 feet above the lowest foundation bedrock contact. The dam crest is 40 feet wide, 2,760 feet long and has a minimum crest elevation of 2610 feet NGVD.

There are two flood control dams that control flood flow in the Santa Ana River. The Seven Oaks Dam is located on the river in the upper Santa Ana Canyon about eight miles northeast of the City of Redlands in San Bernardino County. This dam was completed in 1999. The Prado Dam is about 40 miles downstream of the Seven Oaks Dam. Approximately 47 billion gallons (145,600 acrefeet) of water can be stored in the Seven Oaks reservoir and 61 billion gallons (187,600 acre-feet) in the Prado Dam, reservoir.

North Orange County has two major drainage courses with potential for significant flooding: Santiago Creek and the Santa Ana River. The Santa Ana River, with its normally dry riverbed and broad engineered channel and armored levees, does not appear to present a significant flood hazard. However, the Santa Ana River has a long history of overflowing its banks and flooding in the surrounding areas. To reduce this risk, the U.S. Army Corps of Engineers (Corps) constructed the $2.2 billion Santa Ana River Mainstream Project which includes raising the height of Prado Dam and constructing new gate-works allowing for controlled water releases up to 30,000 cubic feet per second and constructing channel improvements between Prado Dam and the ocean. The Corps’ project provides 100-year flood protection for Orange County. The project was designed to provide 190-year level protection from flooding due to the Santa Ana River.

Lower Santa Ana River Improvements: The Mainstem Project improved 23 miles of existing channel from Weir Canyon Road to the Pacific Ocean include channel widening, improvement to the existing Greenville-Banning Channel located parallel to the river near the coast, relocation of Talbert Channel ocean outlet and construction of rock jetties and derrick stone jetties at the mouth of the river, and bridge modifications to accommodate the widened channel. In the Santa Ana Canyon area, construction will be limited to levee extension and a dike to protect a mobile home park. The construction in the Santa Ana Canyon Area also include the bank protection on the south side along the SR-91(upstream of SAVI Ranch) and on the north side upstream of Weir Canyon Road. In the future, the stretch of channel from Coal Canyon to the Green River Golf Course entrance bridge will be improved.

Loss of life and damage to structures, roads, and utilities may result from a dam failure. Economic losses can also result from a lowered tax base and lack of utility profits. These effects would certainly accompany the failure of one of the major dams in Orange County. There are 10 major dams or reservoirs in Orange County some of which hold millions of gallons of water. Because dam failure can have severe consequences, FEMA and the California Emergency Management Agency require all dam owners develop Emergency Action Plans for warning, evacuation, and post-flood actions. Although there may be coordination with county officials in the development of the Emergency Action Plans, the responsibility for developing potential flood inundation maps and facilitation of emergency response is the responsibility of the dam owner.

Dam failures can result from a number of natural or man-made causes such as earthquakes, erosion of the face or foundation, and improper sitting of the dam, rapidly rising floodwaters, and structural/design flaws. Dam failure can result in severe flood events to lower-lying areas. Flooding, earthquakes, blockages, landslides, lack of maintenance, improper operation, poor construction, vandalism, and terrorism can all cause a dam to fail.

Initial alerting is expected from Dam Keepers who are on duty at the dams.

In the past 50 years, there have been only a small number of dam failures in California. The most catastrophic dam failure in California’s history is that of the infamous St. Francis Dam in Los Angeles County, which failed in March 1928 shortly after construction of the dam was completed. This failure resulted in the deaths of more than 450 people and destruction of nearly 1,000 homes and buildings. Numerous roads and bridges were also destroyed and/or damaged beyond repair.

The County and Orange County Cities would utilize every method known to warn the public of an impending dam failure including the following systems:

Just another Navy A-4 Skyhawk hanging over an Oran

We stopped by the @deltaco in Barstow today - the